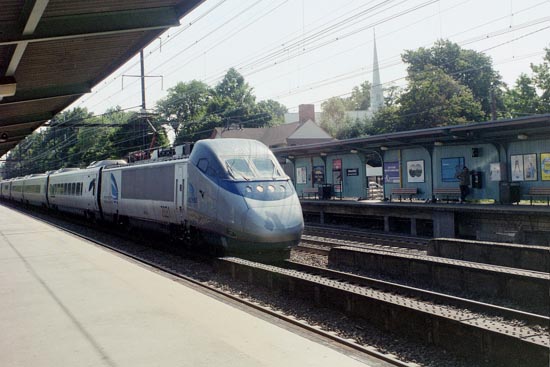 As Amtrak looks to upgrade its operations in the Northeast Corridor, the railroad made it clear public money will be needed to jump start the project.

In testimony before the U.S. House Committee on Transportation and Infrastructure earlier this month, Amtrak President and CEO Joe Boardman said revenues of $1 billion or more annually from Northeast Corridor operations could lead to private investment. But, that is likely to come after taxpayers pony up the dollars to fund upgrades.

“International experience and our own initial investigations make it clear that the initial stages of these programs must be funded predominantly with public money,” Boardman said, according to a transcript. “It is only after the public sector has allocated significant funding and committed itself to a project of this magnitude that the private sector is willing to enter the deal and deliver value for money.

“In fact, looking around the world, private sector involvement in high speed rail development is often sought after a government or state railway has constructed a line and high speed rail service is initiated,” Boardman added. “Once these services are generating revenue streams and most of the planning, environmental and financing risk has been borne by the public, these projects can and will attract private funding that can help repay initial capital costs.”

U.S. Rep. John Mica, R-Fla., chairman of the U.S. House Committee on Transportation and Infrastructure, said high speed rail in the Northeast Corridor “makes sense if done properly,” but he considers the railroad’s $151 billion, 30-year plan too expensive and too slow. Instead, “we must bring in the private sector” to make true high speed rail a priority, Mica contends.

“While I have been a vocal critic of Amtrak, I am also a strong proponent of high-speed rail, passenger rail and transit,” Mica said. “But we have to ensure that any rail development or project makes sense, in places where there is the greatest need and at the lowest possible cost to the taxpayers.

High speed rail is defined as any service that is “reasonably expected to reach sustained speeds of more than 125 mph.” Acela trains averages 83 mph between Washington and New York and 72 mph between New York and Boston.

About Todd DeFeo 346 Articles
Todd DeFeo loves to travel anywhere, anytime, taking pictures and notes. An award-winning reporter, Todd revels in the experience and the fact that every place has a story to tell. He is owner of The DeFeo Groupe and also edits Express Telegraph and The Travel Trolley.
Website

Local, state and federal officials have broken ground on a project to replace the 1.4-mile-long Baltimore and Potomac (B&P) tunnel on the Northeast Corridor.

Throughout the course of its four-plus decade history, Amtrak has drawn the scorn of detractors who saw the federally-subsidized passenger railroad is a drain on taxpayers. Now, millions of dollars in losses on the railroad’s food and beverage service have given more ammunition to opponents. For its part, Amtrak said it plans to eliminate losses on food and beverage service over the next five years. Whether that will silence critics in Congress who next year will have the opportunity to fund — or not fund — Amtrak remains to be seen. “Amtrak has been working to implement a strategic plan

Feinstein: Wrecks Could Have Been Avoided With PTC