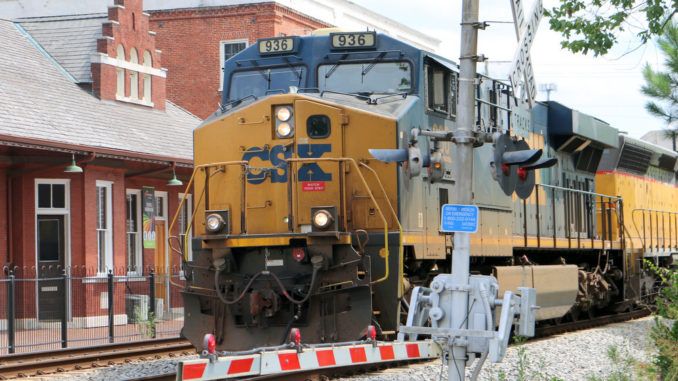 WASHINGTON — It starts with the clanging of a bell and flashing red lights.

In the distance, a train’s horn breaks the silence. The speeding train approaches, its rumbling permeates the area surrounding the grade crossing.

The scene is vaguely reminiscent of thousands of grade crossings nationwide. Yet, despite the safety measures and organizations dedicated to reducing rail-related deaths at grade crossings, the numbers remain high.

About 500 Americans died as pedestrians on the rails annually, according to Operation Lifesaver. And just as many people are severely injured by trains annually.

Raiload tracks and yards are private property, despite many misconceptions. The odds of being struck by a train are increasing. In 2001, passenger and freight train miles exceeded 504 million.

“A 150-car freight train traveling at 50 miles per hour takes one-and-a-half miles to stop,” said Mike Langer, state coordinator of Minnesota Operation Lifesaver. “Vehicle drivers must remain alert, respect warning devices, and never try to beat a train to a crossing, because even if it’s a tie, you lose.”

The Federal Highway Administration credits Operation Lifesaver with helping to save 11,000 lives and preventing 54,000 injuries at highway-rail grade crossings since its inception. However, the number of pedestrians killed while trespassing on railroad tracks and property is on the increase. Preliminary federal statistics for 2001 indicate a 9.1 percent increase in pedestrian trespasser deaths over 2000.

According to the Federal Railroad Administration, there was a 23.6 percent increase in pedestrian rail trespass deaths in the first four months of 2002 compared to 2001.

“People may not realize how often drivers are risking their lives and those of their passengers by trying to beat the train at crossings,” said Bob Lease, Superintendent of Burlington Northern Santa Fe’s Minnesota Division.

Portions of this report were published in the April edition of The Cross-Tie.