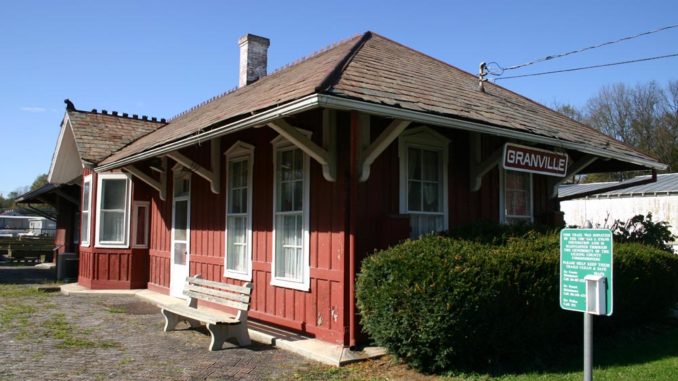 GRANVILLE, Ohio — The first proposed line through town was in 1869, when the Atlantic and Lake Erie Railroad was chartered.

“The group of men, including some from Granville, who purchased the assets of the road at the receiver’s sale quickly built enough track to make it possible to ship Sunday Creek coal to Columbus,” William T. Utter notes in his 1956 book Granville: The Story of an Ohio Village.

In the latter half of the 1870s, the company was reorganized as the Ohio Central Railroad. Track was completed through Granville in 1880, and the first train rolled into town at 8 a.m. on May 29 of that year. On Feb. 15, 1881, the first train carrying mail into town arrived.

In 1967, the New York Central and the Pennsylvania Railroad merged to form the Penn Central Company.

Starting in the mid-1980s, the former right-of-way was purchased for use as a bicycle trail. That trail passes by the Granville depot.