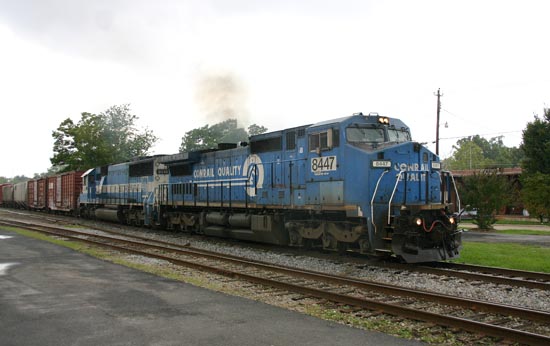 GRIFFIN, Ga. – Rail service reached the Spalding County seat in 1842 with the completion of the Monroe Railroad.

The railroad, chartered in December 1833, began construction in 1834 with trains traveling between Macon and Forsyth in December of that year. Eight years later, the railroad was extended to Griffin and finally reached Atlanta in 1846, the year after it was sold to Daniel Taylor.

In 1871-2, the Central of Georgia assumed the railroad.

A second railroad – the Savannah, Griffin & North Alabama Railroad – opened between Griffin and Newnan in 1870. In 1872, the line was extended to Carrolton. On Nov. 26, 1890, the company was sold to the Savannah and Western Railroad.

A third line – the Georgia, Midland and Gulf Railroad – completed a 100-mile line between Columbus and McDonough in December 1887, which passed through Griffin. In 1895, the railroad entered into receivership and was later sold to the Georgia Midland Railway. That line was abandoned in 1979, though parts of the former right of way have since been purchased.