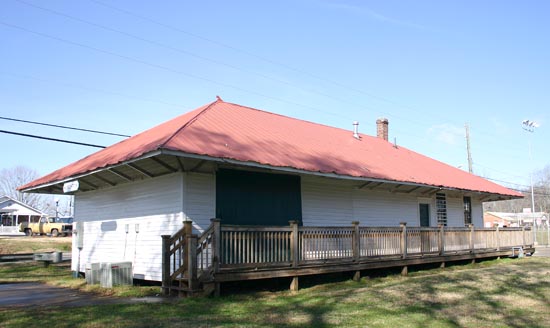 HOSCHTON, Ga. – There are no longer any tracks running through town, but the evidence of a railroad can easily be seen downtown.

In 1883, the Gainesville, Jefferson and Southern Railroad built a line from Gainesville, Ga., to Monroe, Ga. That same year, a depot was built on land donated by the Hosch brothers, and the building eventually became the centerpiece of the city.

“The railroad transformed the town and surrounding areas, serving as a catalyst for the development of commerce, agriculture, education, industry, communications, and transportation,” a historical marker near the depot reads. “The railroad provided a link with other Georgia communities, opened the market for the region’s agricultural products, made manufactured goods widely available, and stimulated the growth of businesses, churches, schools, and the town itself.”

In 1947, train service ended in Hoschton.