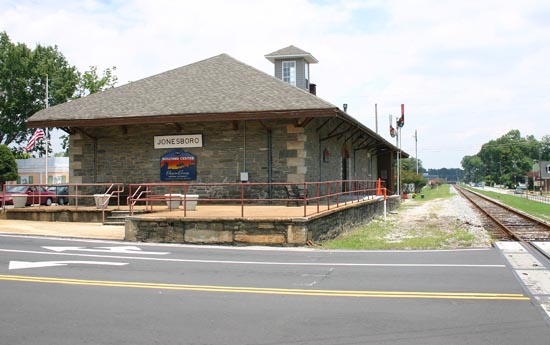 JONESBORO, Ga. – It’s not enough to say Jonesboro’s train depot was built in 1867.

Railroads in Jonesboro date to 1843, when the Monroe Railroad built a line between Savannah, Ga., and current-day Atlanta, then known as Marthasville. The Monroe Railroad, chartered on Dec. 23, 1833, laid tracks between Macon and Forsyth in the 1830s, with trains beginning operations in December 1838. Daniel Tyler purchased the railroad in 1845 and organized the Macon and Western Railroad, which in 1871 was consolidated into the Central of Georgia.

In 1843, engineer Col. Samuel Goode Jones “laid out a new town according to a formal plan that literally overlay the original village,” according to The New Georgia Encyclopedia. The town was later renamed Jonesboro in his honor.

Three years later, regular railroad service was up and running and a depot was built on the north side of town, where the Confederate Cemetery today stands. On Aug. 31, 1864, during the Battle of Jonesboro, the depot was burned and the railroad destroyed by Gen. William T. Sherman’s troops.

In the decade preceding the turn of the 20th century, passenger rail began serving Jonesboro.

“Local rail service offered several round-trip runs a day, and it became commonplace for people who lived in Jonesboro to work, shop, and attend amusements in Atlanta,” according to The New Georgia Encyclopedia. “This rail service ended during the 1920s as the automobile began its ascendancy over railroads.”

At around the same time, the turn of the 20th century, Jonesboro was becoming a regional shipping center, especially for cotton. Bales of cotton weighing 1,000 pounds a piece could easily be weighed by scales in the depot.

The railroad continued to use the depot until the 1960s. In 1970, the Central of Georgia leased the building to Historical Jonesboro. Two years later, the building was renovated and in June 1996, a welcome center opened in the depot.

Today, commuter rail services are considered between Lovejoy and Atlanta, passing through Jonesboro.