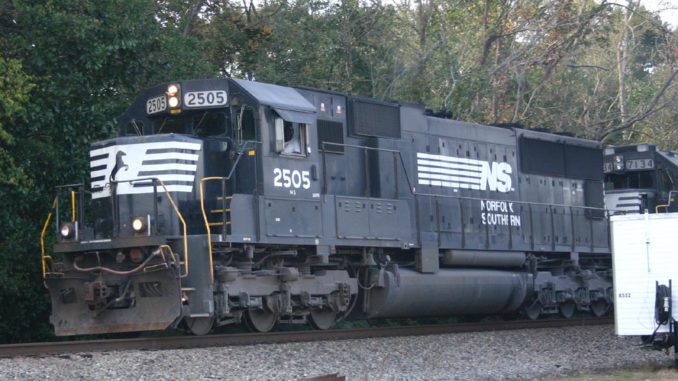 McDONOUGH, Ga. – Tracks were laid through McDonough in the early 1880s as the East Tennessee, Virginia and Georgia Railroad built its “Atlanta Division.”

The railroad, created in 1869, purchased lines throughout Georgia, but was fairly disjoint before the “Atlanta Division” was completed in 1882. The 158-mile line connected Rome and Macon via Atlanta. Four years later, the railroad was reorganized as the East Tennessee, Virginia and Georgia Railway and in 1895 was merged into the Southern Railway.

A second railroad – the Georgia, Midland and Gulf Railroad – completed a 100-mile line between Columbus and McDonough in December 1887. In 1895, the railroad entered into receivership and was later sold to the Georgia Midland Railway. That line was abandoned in 1979, though parts of the former right of way have since been purchased.

Henry County’s railroad history is most noted for the Camp Creek Train Wreck of 1900 when a Southern Railway passenger train crashed just outside of McDonough.

The northbound passenger train, heading from Macon to Atlanta, was running behind schedule when it pulled into the McDonough depot around 9:30 p.m. The train departed about 15 minutes later, heading towards the bridge over Camp Creek, which had been washed out by excessive rain.

The engineer, J.T. Sullivan, was unable to stop the train before reaching the bridge and the train crashed into Camp Creek. More than 30 people were killed.
A near-replica of the engine, also known as “Old No. 7,” is on display in Heritage Park in McDonough. That engine was build in 1934.

Today, McDonough remains an important railroad link for Norfolk Southern and dozens of freight trains pass through the city. The railroad’s main line between Macon and Atlanta passes a few blocks from the historic downtown area.

The railroad also operates a training center in the city. All craft employees spend some time training there.

A train depot still stands alongside the tracks and is used by a local lumber company.

Published in the January 2005 edition of The Cross-Tie