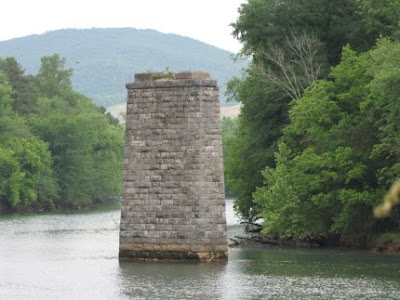 EMERSON, Ga. – In order to complete the Western & Atlantic Railroad, engineers had to overcome a number of natural obstacles. That resulted in a 1,447-foot-long tunnel through Chetoogeta Mountain and a bridge over the Etowah River south of Cartersville.

The bridge over the Etowah River was completed in 1847, about three years before the Atlanta-to-Chattanooga rail line opened. The bridge’s stone pillars are all that remain of the once-formidable structure.

During the Civil War, James J. Andrews, who led a group of Union soldiers with the intent of destroying the Western & Atlantic Railroad, identified the bridge as a major target of The Andrews Raid. However, the group of Union spies left the bridge intact, allowing a group of pursuers to continue their chase, which eventually proved successful.

Just north of the bridge, the former Etowah Railroad joined the Western & Atlantic Railroad. At this point during The Andrews Raid, the pursuers commandeered the Yonah, an Etowah Railroad locomotive.

“We had better destroy that, and the big bridge,” one of the raiders told Andrews. He simply responded: “It won’t make any difference.”

During the Civil War, the bridge was burned a number of times by both Union and Confederate troops. A newer bridge opened in 1944 and railroad traffic was rerouted away from the historic structure.

About Todd DeFeo 363 Articles
Todd DeFeo loves to travel anywhere, anytime, taking pictures and notes. An award-winning reporter, Todd revels in the experience and the fact that every place has a story to tell. He is owner of The DeFeo Groupe and also edits Express Telegraph and The Travel Trolley.
Website

WASHINGTON — Amtrak and First Class Motorcycle Tours have teamed up to offer two new vacation packages which include first-class accommodations on Amtrak’s Auto Train that allows motorcycle riders to travel with their bikes on board the train between Lorton, Va., south of Washington, DC and Sanford, Fla., just outside of Orlando. The motorcycles are secured in specially-designed carriers and travel in the train’s auto carriers while tour participants travel on the train in private roomette sleeping accommodations. All meals on board the train are included in the price of the tour. Both the northbound and southbound Auto Trains depart

MARTA police today arrested a 42-year-old man, charging him with assaulting a four people, including a “high-ranking military official” on a train at the Airport Station and an elderly woman, officials said.

Runnin’ Down a Train

I was driving along Interstate 24, when I came to a familiar bridge over a rail line.