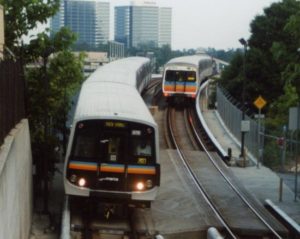 ATLANTA — The Metropolitan Atlanta Rapid Transit Authority (MARTA) is looking to expand its system to include “high-capacity transit” along a major thoroughfare into the city’s northern suburbs.

Transit options for the 12-mile corridor along Ga. Highway 400, according to a notice published in the Federal Register, could include bus or rail.

While MARTA officials have looked to expand the city’s subway system, new tracks haven’t been brought into service since 2000.

“MARTA has identified an alignment that would provide approximately 11.9 miles of transit service along the GA 400 corridor within existing right-of-way from the existing North Springs MARTA station to Windward Parkway,” according to a notice published in the Federal Register.

Elsewhere in the city, crews are working on a new streetcar line that will connect MARTA with a number of popular tourist attractions. When it opens, the 2.7-mile streetcar line will connect with MARTA, the city’s transit system. Future plans call for the new streetcar to tie into the Atlanta BeltLine, a public-private partnership that is building walking paths along a ring of mostly abandoned railroad right-of-ways that circle the city.

About Todd DeFeo 344 Articles
Todd DeFeo loves to travel anywhere, anytime, taking pictures and notes. An award-winning reporter, Todd revels in the experience and the fact that every place has a story to tell. He is owner of The DeFeo Groupe and also edits Express Telegraph and The Travel Trolley.
Website

The bill goes to Georgia Gov. Nathan Deal for his signature.

A special guest steam locomotive arrived this morning at the Southeastern Railway Museum.