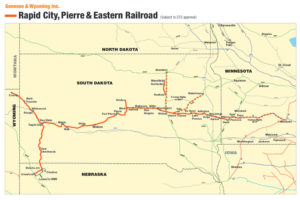 Canadian Pacific is selling the west end of its Dakota, Minnesota & Eastern line to Genesee & Wyoming for continued rail operations.

The $210 million sale is expected to close by mid-2014, subject to approval of the U.S. Surface Transportation Board and satisfaction of other customary closing conditions. Upon closing, the new railroad will be named the Rapid City, Pierre & Eastern Railroad.

G&W expects to hire approximately 180 employees to staff the new company and anticipates these employees will come primarily from those currently working on the rail line. The agreement with G&W concludes the comprehensive strategic review process that was launched by CP on December 4, 2012.

Canadian Pacific has operated the rail line in this area since it assumed operational control of the DM&E railroad in 2008 and will continue to own and operate approximately 1,900 miles of former DM&E track following the sale of the west end.

The purchase price is subject to certain adjustments including the purchase of inventory, equipment and vehicles. For CP, it is anticipated the sale will result in a net after-tax write down of approximately $240 million, subject to closing adjustments, which will be recorded in CP’s fourth quarter 2013 financial statements.

The transaction is cash positive for CP and the sale will not have a material effect on anticipated future earnings. For G&W, it is expected the transaction will generate annual revenues of approximately $65 million and be immediately accretive to book and cash earnings per share in 2014.

Railroad officials said the sale should benefit CP in its ongoing transformation to make its network stronger for its entire customer base. For G&W, the purchase adds an important rail corridor with a strong customer base and continued access to CP’s North American network, officials said.

“There is a strong long-term franchise here and we are pleased to have found a partner in Genesee & Wyoming, which will maintain a high standard of customer service,” CP Chief Executive Officer, E. Hunter Harrison said in a statement. “South Dakota remains an important economic driver in the Midwest and CP looks forward to working with G&W.”

“We are excited to be working with CP to expand G&W’s rail operations into South Dakota, as well as into Wyoming, Minnesota and Nebraska,” Jack Hellmann, G&W’s CEO, said in a statement. “Given G&W’s commitment to safety, service and long-term infrastructure investment, we believe this transaction will significantly benefit our customers, the employees we plan to hire, the communities that we serve, and our connecting Class I rail partners.”

The west end includes roughly 660 miles of CP’s current operations between Tracy, Minn., and Rapid City, S.D.; north of Rapid City to Colony, Wyo.; south of Rapid City to Dakota Jct., NE; and connecting branch lines, as well as trackage from Dakota Junction to Crawford, NE, currently leased to the Nebraska Northwestern Railroad (NNW). Customers on the line ship approximately 52,000 carloads annually of grain, bentonite clay, ethanol, fertilizer and other products. The new rail operation will have the ability to interchange with CP, Union Pacific, BNSF and the NNW.

Evercore served as exclusive financial advisor to CP on the transaction.

SIOUX FALLS, S.D. — Officials from the city of Sioux Falls, the state of South Dakota and BNSF Railway celebrated the closure of the 5,000th grade crossing on BNSF’s rail network, setting a new national record for grade crossing closures and safety improvement, the railroad announced.

WASHINGTON — The Surface Transportation Board approved Canadian Pacific Railway Limited’s plan to buy the Dakota, Minnesota & Eastern Railroad Corporation and its subsidiaries: Iowa, Chicago & Eastern Railroad and Cedar American Rail Holdings. The official effective date of the final decision is Oct. 30. “The DM&E is an excellent fit for Canadian Pacific making this a strategic end-to-end addition to our network,” said Fred Green, President and Chief Executive Officer of CP. “This is also a positive development for CP, DM&E and IC&E customers. CP customers will have direct single line access to the Midwest US markets and the

FORT WORTH, Texas — BNSF Railway Co. announced that it has been honored by TRANSCAER (National Transportation Community Awareness and Emergency Response) for its commitment to helping communities prepare for and respond to possible hazardous materials transportation incidents.