Genesee & Wyoming Inc. is buying Providence and Worcester Railroad Co. for approximately $126 million (or $25 per share). 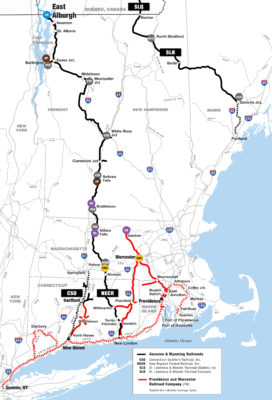 The deal, which is subject to satisfaction of customary closing conditions, is expected to close following the receipt of P&W shareholder approval in the fourth quarter of 2016.

Agreements include exclusive freight access over Amtrak’s Northeast Corridor between New Haven, Conn., and Providence, R.I., and trackage rights over Metro-North, Amtrak and CSX between New Haven, Conn., and Queens, N.Y. P&W interchanges with G&W’s NECR and CSO railroads, as well as with CSX, Norfolk Southern, Pan Am Railways, Pan Am Southern, the Housatonic Railroad and the New York and Atlantic Railroad, and also connects to Canadian National and Canadian Pacific via NECR.

Upon approval by the Surface Transportation Board (STB), P&W would be managed as part of G&W’s Northeast Region, led by Senior Vice President Dave Ebbrecht. The addition of P&W to G&W’s existing presence in the region substantially enhances G&W’s ability to serve customers and Class I partners in New England.

The acquisition is anticipated to unlock significant cost savings through overhead, operational and long-term network efficiencies as well as to generate significant new commercial opportunities, G&W said in a news release.

NEWARK, N.J. — With the construction phase of the Trenton Transit Center project coming down the home stretch, Governor Jon S. Corzine joined federal, state and local officials today to tour the rebuilt, expanded and renamed facility — heralding a new era of transportation in the state capital. The newly expanded transit center comfortably accommodates more than 16,000 passenger trips each weekday, making it N.J. Transit’s third-busiest outlying station. “This attractive and functional facility demonstrates what we can achieve with the wise use of state and federal funds,” said Governor Corzine. “This project advances our policy of promoting public transportation

WASHINGTON — The country needs a partnership among “freight railroads, the federal government, Amtrak and other stakeholders” in order to improve the nation’s transportation system and protect the environment, a member of the Transportation and Infrastructure Committee says. “When we look for ways to improve our nation’s transportation system and protect the environment, nothing should be a higher priority than improving our rail capacity – for freight, passenger and high speed service,” said U.S. Rep. John L. Mica, R-Fla. “I am concerned that one tool we already have for improving capacity – the Rehabilitation and Improvement Financing (RIFF) loan program

Amtrak is riding a wave of record ridership to highlight its reducing dependence on federal subsidies to support operations.