Amtrak’s long-distance trains between New York and southern destinations more or less look like a compilation of the first dozen or so cars the railroad could find.

But, the consists are usually the same from trip to trip.

Between New York and Washington, the train is pulled by an AEM-7 or an HHP-8, both electric locomotives. South of Washington, a pair of P40DC or P42DC diesel-electric engines handle the duty.

Amtrak relies on heritage fleet baggage and diner cars, which are set to be replaced with the new long-distance cars currently in production. Newer cars — in the form of Viewliners for sleepers and Amfleet for lunge and coaches — make up the rest of the consist. 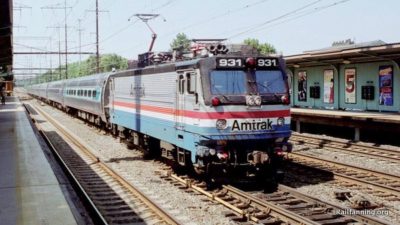 The Silver Meteor is similar, but typically adds a third Viewliner Sleeping car:

About Todd DeFeo 344 Articles
Todd DeFeo loves to travel anywhere, anytime, taking pictures and notes. An award-winning reporter, Todd revels in the experience and the fact that every place has a story to tell. He is owner of The DeFeo Groupe and also edits Express Telegraph and The Travel Trolley.
Website

A Closer Look at the Roy O. Disney at Walt Disney World

The Roy O. Disney locomotive has an incredible story. The locomotive, formerly No. 251 of the United Railways of Yucatan, was one of five Disney officials purchased in Mexico for potential use in the Magic Kingdom at Walt Disney World.

KENNESAW, Ga. – The Southern Museum of Civil War & Locomotive History will kick off its packed 2013 calendar of events with a family day focusing on all aspects of trains and featuring a model train expo. The “Trains, Trains, Trains” event will be held from 9:30 a.m. until 4 p.m. on Saturday, Jan. 19, in the museum’s Jolley Education Center and throughout the museum. This family friendly event will feature crafts, tips and techniques for building a home layout and a variety of different model train layouts that can be operated by children of all ages. The daylong event