GRAPEVINE, Texas — A string of maroon and cream-colored coaches wobble back and forth as the train picks up speed. Heading southwest from this bucolic community of 50,000, the train leaves from a place time seemingly forgot and heads to another such area.

The Grapevine Vintage Railroad tourist train passes suburbia and modern development as soon as it departs from Grapevine, a town that cherishes its rugged western appearance and attracts tourists with wine tasting rooms and other merchants along its main street.

If not for the diesel locomotive — a GP-7 nicknamed “Vinny” built in 1953 that served on the Santa Fe Railroad before finding a new lease on life pulling tourist trains — one might be hard pressed to realize it’s 2016, not 1916. And, the train’s final destination — the historic Fort Worth Stockyards — will do little to assuage that notion.

The heritage railroad runs excursion trains along  tracks formerly owned by the St. Louis Southwestern Railway, better known to many as the Cotton Belt.

A railroad comes to Grapevine

Tracks first reached Grapevine — then known as Grape Vine Prairie — in 1888. The current depot that stands in the heart of town was built in about 1901 and may have replaced an earlier structure, according to a nearby historical marker; some sources date the depot to 1888.

The station was closed in 1972, and in 1973, the depot was relocated to Heritage Park, roughly a mile from the current location. It was relocated back to its original location in about 1994.

Dallas Area Rapid Transit (DART) purchased the tracks from north of Fort Worth to Wylie, Texas, in 1990 to preserve the right of way. As of 2010, Dallas, Garland and Northeastern Railroad operated trains over the line between Carrollton and Addison and Fort Worth & Western trains operated between Fort Worth and Carrollton.

The Forth Worth & Western apparently launched the excursion service in 1996, and the city of Grapevine assumed operations and renamed it the Grapevine Vintage Railroad in December 2000, according to state records.

According to a 2007 U.S. Railroad Retirement Board decision, the city contracted with Forth Worth & Western crews “to operate the equipment and hired steam and diesel mechanics to maintain the equipment. However, on October 15, 2006, the City of Grapevine ended its arrangement with FWWR and began operating its own services.”

The corridor could see TEX Rail commuter trains as soon as 2018. The trains would stop at a station in downtown Grapevine.

In addition to the vintage railroad and the historic depot, downtown Grapevine is home to three other historic railroad buildings.

One of the items is a Cotton Belt section house dating from 1888. The Section House was at one point re-loaced to Hall-Johnson Road, but moved back to its original location in 1992.

Another interesting artifact is a turntable from 1927 that is located on property the city purchased from the Southern Pacific Railroad. The city on Aug. 27, 1992, purchased the turntablefor $1 from the Santa Fe Railroad. At the time, it was located in Saginaw, Texas, and moved to Grapevine within 48 hours at a cost of $10,000.

Last, but not least, is the interlocking tower. Tower No. 16 was built in 1903 and originally located in Sherman, Texas. It was moved to its current location in 2002.

A stop in Fort Worth 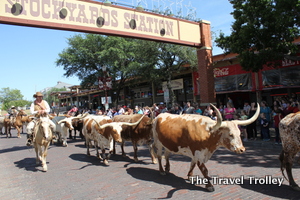 Many consider Fort Worth to be “where the West begins.” The Fort Worth Stockyards was once the epicenter of the cattle industry.

While still in active use for cattle sales, the historic stockyards attract thousands of tourists looking to climb atop a longhorn for a photo op, watch the twice-daily cattle drives or catch a glimpse of the unabated wild west.

About Todd DeFeo 343 Articles
Todd DeFeo loves to travel anywhere, anytime, taking pictures and notes. An award-winning reporter, Todd revels in the experience and the fact that every place has a story to tell. He is owner of The DeFeo Groupe and also edits Express Telegraph and The Travel Trolley.
Website

WASHINGTON – The U.S. Department of Transportation awarded Amtrak $450 million in funding to upgrade its rail infrastructure to support more frequent and faster high-speed rail service, and to improve reliability of current service between New York and Washington.

NEWARK, N.J. – The N.J. Transit Board of Directors on July 15 adopted a $1.34 billion Operating Budget and a $1.19 billion Capital Program for Fiscal Year 2005 (FY05), and avoided increasing the system’s fares, officials said. “Thanks to Governor McGreevey’s commitment to transportation, transit commuters will benefit from improved service on buses and trains, additional parking at stations, and refurbished facilities,” said NJ DOT Commissioner and N.J. Transit Board Chairman Jack Lettiere. “This investment will address the Governor’s goals of improving the quality of life for commuters and reducing choking traffic congestion on our roadways.” To keep fares level,

Amtrak wants to upgrade its operations along the Northeast Corridor and bring about true high speed rail. But, the railroad made it clear public money will be needed to fund upgrades to the 457-mile-long corridor, which could cost taxpayers upwards of $151 billion and take as long as 30 years to complete. While annual revenues of $1 billion or more could ultimately lead to private investment, that is likely to come after taxpayers pony up the dollars to fund improvements, Amtrak President and CEO Joe Boardman said in testimony before the U.S. House Committee on Transportation and Infrastructure. “International experience