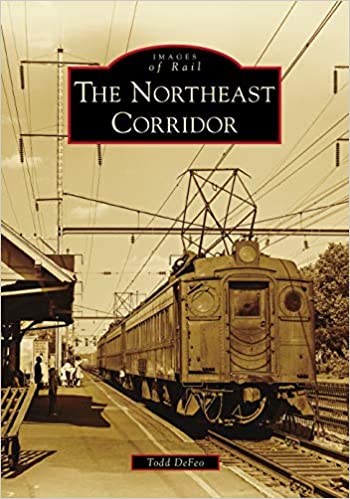 A new book chronicling the Northeast Corridor by Railfanning.org editor Todd DeFeo is set to be released in early January.

Arcadia Publishing was supposed to release the book in 2020. Without notice, the company decided to delay publication and blamed the COVID-19 pandemic for the decision.

The Northeast Corridor between Boston and Washington is perhaps the single most significant stretch of railroad in the country, connecting dozens of cities like Baltimore, Philadelphia, and New York City. The line carries thousands of passengers daily on a mix of long-distance, regional, and commuter trains.

Before it emerged as a vital stretch of railway, some of the earliest railroads in America created a foundation for the future corridor. They constructed a patchwork of lines that laid the groundwork for the Northeast Corridor of today, which later formed integral portions of the Pennsylvania Railroad and the New York, New Haven & Hartford Railroad.

The impact of this line is still felt in the many communities that developed along the tracks. While the Northeast Corridor continues to evolve, it remains as relevant as it was when the original developers conceived the rail link nearly two centuries ago.

This is DeFeo’s third release with Arcadia or its sister publisher, The History Press. Last year, The DeFeo Groupe published two other books by DeFeo, one about the Indiana, Alabama & Texas Railroad and one about streetcars in Clarksville, Tennessee.

DeFeo is also publishing books about the Atlanta Northern Railway and the Western & Atlantic Railroad in 2021.

The NJ Transit Board of Directors has approved a nearly $1.6 billion contract to replace an aging bridge over the Hackensack River along the Northeast Corridor.

Amtrak to Exceed 30 Million Passengers for the First Time Ever

WASHINGTON – Amtrak is projecting that for the first time ever its annual ridership will exceed 30 million passengers and in the process set a new all-time record when the current fiscal year ends Sept. 30.

The governors of New Jersey, New York and Connecticut reached an accord on splitting federal money for transit agencies doled out amid the COVID-19 pandemic.