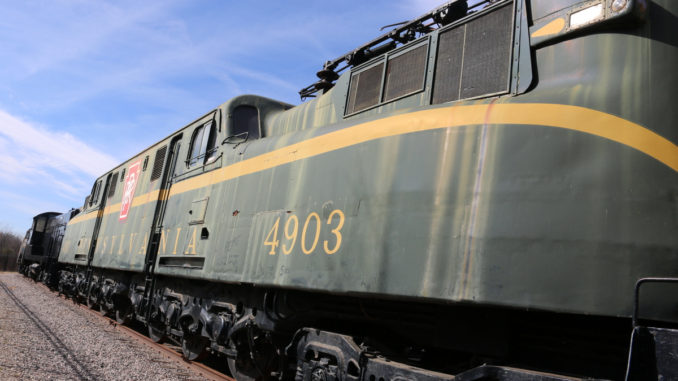 Between 1934 and 1943, 139 of the Pennsylvania Railroad’s GG1 class of electric locomotives were built at the railroad’s shops in Altoona, Penn. The railroad designed the locomotive to pull 12 to 14 cars along the heavily traveled Northeast Corridor.

The popular locomotives remained in service with the railroad and its successors — including Penn Central and Amtrak — until the early 1980s. As such, the GG1 is one one of the most recognized electric locomotives worldwide.

The GG1 measured 79 feet, 6 inches long and weighed 477,000 pounds. The locomotive’s body featured double cabs — perfect for bidirectional operation — set up high about a third of the way along the locomotive from each end for greater crew safety in the event of a collision and was a single unit formed as a bridge-truss framework and clad in welded steel plate.

The nose in front of the cab windows was lowered to improve the forward view, while the center portion of the nose was full height to carry the current-collection pantographs. The bodywork as a whole was smoothly rounded, with an appearance that suggested immense power and speed.

Two steel locomotive frames linked by a hinge at the locomotive’s middle which allowed side-to-side movement. Six driving wheels on three axles were fitted toward the center of the locomotive on each truck and a four-wheeled, unpowered guiding truck was mounted toward each end.