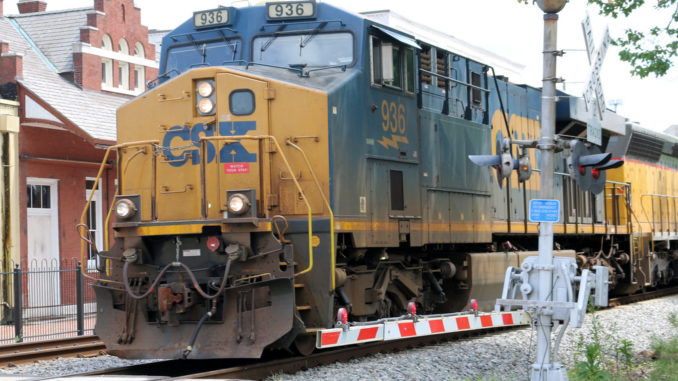 MARIETTA, Ga. — Tracks through Marietta were laid prior to the Civil War and the Western & Atlantic Railroad, created by a Dec. 21, 1836, act of the Georgia General Assembly, operated trains between Atlanta and Chattanooga, Tenn.

The Kennesaw House, located adjacent to the train depot, is an important landmark for railfans and especially for history buffs.

It was here on April 12, 1862, that James Andrews and 19 raiders boarded a Western & Atlantic train bound for Chattanooga. The plan was to burn bridges, tear up track and cut telegraph lines between Marietta and Chattanooga to disrupt one of the Confederate’s most important rail lines.

“The mind and heart shrink back appalled at the bare contemplation of the awful consequences which would have followed the success of this one act,” wrote the editor of the Southern Confederacy.

The historical marker outside the hotel reads: “In the ante-bellum days, this hotel was a summer resort for planters attracted by the gay social activities of this town. In 1862, J.J. Andrews and his federal raiders met here to begin the daring Locomotive Chase. Confederate wounded were fed and treated here after many battles, and civilian refugees from overrun Tennessee and Kentucky stayed here, moving south as Federals drew near. July 3, 1864, Sherman has his headquarters in this hotel, while directing his pursuit of the Confederates retiring to Atlanta. After the war, numerous northern visitors wintered in Marietta, many stopping at the Kennesaw House.”

The Western & Atlantic Railroad was acquired by the Nashville, Chattanooga & St. Louis Railroad in 1890. The Louisville & Nashville Railroad absorbed that railroad in 1957. Today, the line is operated by CSX, a successor of the L&N, and is heavily traveled.

A second line — the Marietta & North Georgia Railroad — was built starting in 1874. In 1887, tracks were completed to Murphy, N.C.

The line changed hands over the next few years. In 1902, the L&N Railroad purchased the line.

CSX abandoned some of the line. Today, some portions are operated by the Georgia Northeastern Railroad.

A version of this article was originally published in the February 2005 edition of The Cross-Tie.