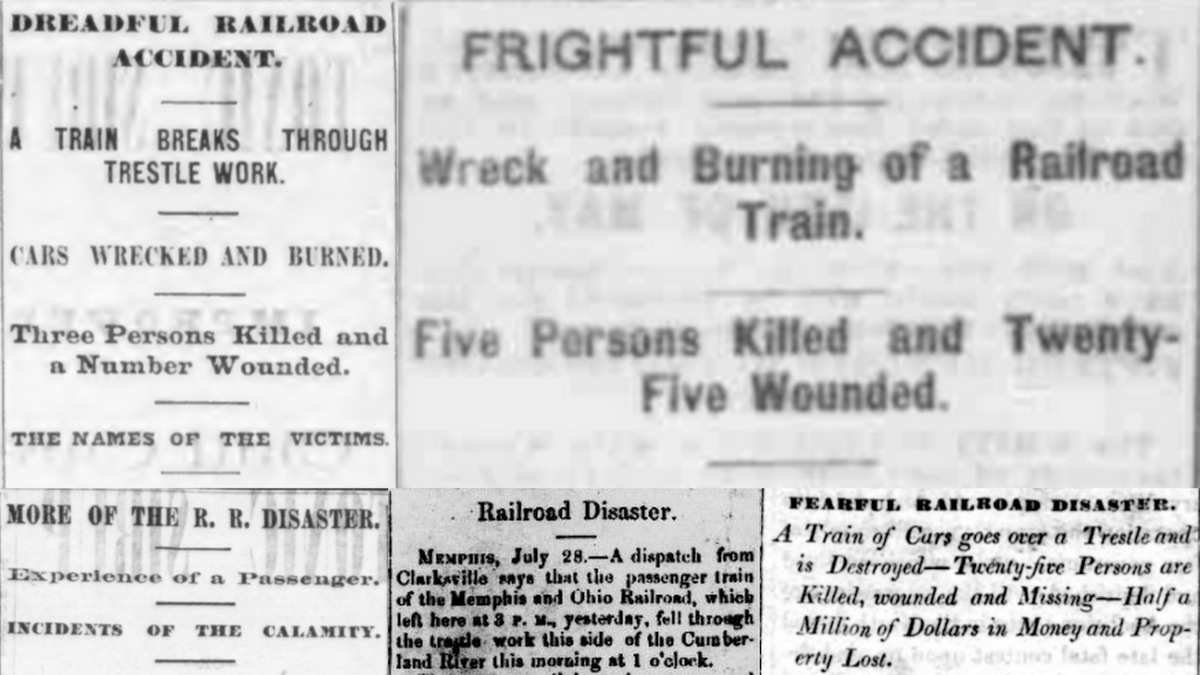 The train, which left Memphis at 3 p.m. on July 27, was scheduled to steam for nearly 12 more hours, passing through Clarksville, Tennessee; Bowling Green, Kentucky; and other points during the night hours before arriving in Louisville at 9 a.m., 190 track miles to the north.

In Humboldt, Tennessee, the Louisville-bound No. 2 express train added a “through” sleeping car from a New Orleans train.

By 1 a.m., the train was perhaps a couple of minutes behind schedule as it approached the bridge over Budds Creek, crossing consisting of “four spans of short wooden girder bridges joined to a trestle.” Because the railroad rebuilt the line following the Civil War, the trestle was said to be just two years old, and the bridges three. Coincidentally, Budds Creek was the scene of a fatal crash less than three years earlier, but that thought likely entered no one’s mind in the early morning hours of July 28, 1869.

“As described by those who were aboard the ill-fated train when it went down, the situation was awful in the extreme.”
What happened next was the subject of considerable debate. According to some accounts, the train’s speed increased. Two passengers from New Orleans — identified in the press as Mr. Doll and Mr. White — allegedly arose, dressed and inquired as to the problem. As the train approached the bridge crossing Budds Creek, the engineer sounded the whistle.

The action was, apparently, odd considering there was no requirement for him to do so at this location.

Moments later, the bridge gave way. The train crashed into the creek bed below. Fire began to consume the train’s cars. Only the sleeping car at the rear of the train did not fall into Budds Creek. Five people ultimately died as a result of the wreck.

“As described by those who were aboard the ill-fated train when it went down, the situation was awful in the extreme,” the Federal Union newspaper of Milledgeville, Georgia, reported. The ensuing fire “made nearly a complete ruin of the train and its contents.”

Back to the Top
Memphis, Clarksville & Louisville Railroad