The City Too Busy to Hate currently has one passenger station in use, serving Amtrak’s Crescent train running between New York and New Orleans. But, the city has a long history with passenger stations.

Here is a brief overview of the city’s major train stations of the past — and one still in use:

The Western & Atlantic and Georgia railroads shared a small depot in Atlanta starting circa 1845. 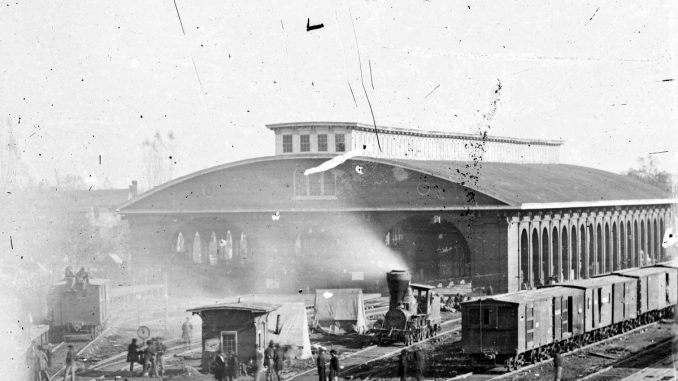 Edward Arista Vincent is credited with designing Atlanta’s Union Station. The depot stood in State Square, which was the central square of Atlanta in the days before the Civil War. The station opened circa 1853 and also served the Georgia, Macon & Western and Atlanta & West Point railroads.

Union troops under Gen. William T. Sherman burned the depot in 1864 before leaving the city on their famous March to the Sea. 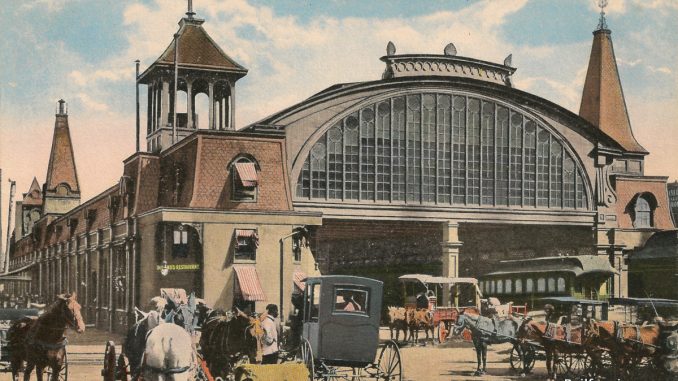 Architect Max Corput designed the city’s second train station, built on the site of its 1853 predecessor. Built in Second Empire style, the depot opened in 1871 but was regularly maligned by the turn of the 20th century. In 1905, several railroads abandoned the station in favor of the new Terminal Station.

In a 1901 article, The Atlanta Constitution noted, “There is only just room enough in the shed for truck-men and switch engines, but there is little provision for the traveling public, and it is a case of every man for himself. In order to reach the outside tracks a person unacquainted with the depot has just crossed five tracks and says he thanks his good fortune that he escaped with no more serious damage than a few grease spots on his clothing. Pandemonium reigns.”

Terminal Station opened in 1905 as the second station in Atlanta but was actually the larger of the two. The station served Southern Railway, Seaboard Coast Line, Central of Georgia and Atlanta & West Point railroads.

The station closed in June 1970 and was razed the following year. The Richard B. Russell Federal Building, built in 1979, stands in its place.

The third Union Depot (or Station) opened on April 18, 1930. Atlanta Mayor I.N. Ragsdale and A.J. Woodruff, vice chairman of the Georgia Public Service Commission, were among the dignitaries to greet a train carrying a private care with Nashville, Chattanooga & St. Louis President J.B. Hill and the railroad’s board of directors.

Once the new station opened, Atlanta building inspector C.J. Bowen on April 19, 1930, issued a permit to raze the Union Station building erected in 1871.

Architect Neel Reid designed the current Amtrak station in Atlanta. Southern Railway built the station in 1918 as a commuter stop.

When Terminal Station closed in 1970, Peachtree Station became the only passenger station in Atlanta. Amtrak starting using the station when it took over operation of the Crescent from Southern in 1979.

About Todd DeFeo 361 Articles
Todd DeFeo loves to travel anywhere, anytime, taking pictures and notes. An award-winning reporter, Todd revels in the experience and the fact that every place has a story to tell. He is owner of The DeFeo Groupe and also edits Express Telegraph and The Travel Trolley.
Website

In July 1911, the Greene County Railroad incorporated to acquire the equipment of the Bostwick Railroad and also built a line connecting Monroe and Bostwick.

An All-Too-Short Profile of The Georgia Railroad

The Georgia Railroad is one of the more famous routes to operate in Georgia. It is among the first railroads in the state and operated until the 1980s when it merged into the Family Lines System.

First Gainesville Midland Trains Rolled Out of Athens in November 1906

Thursday, Nov. 1, 1906, was a momentous day for the city of Athens, Ga. The first Gainesville Midland train pulled into town.